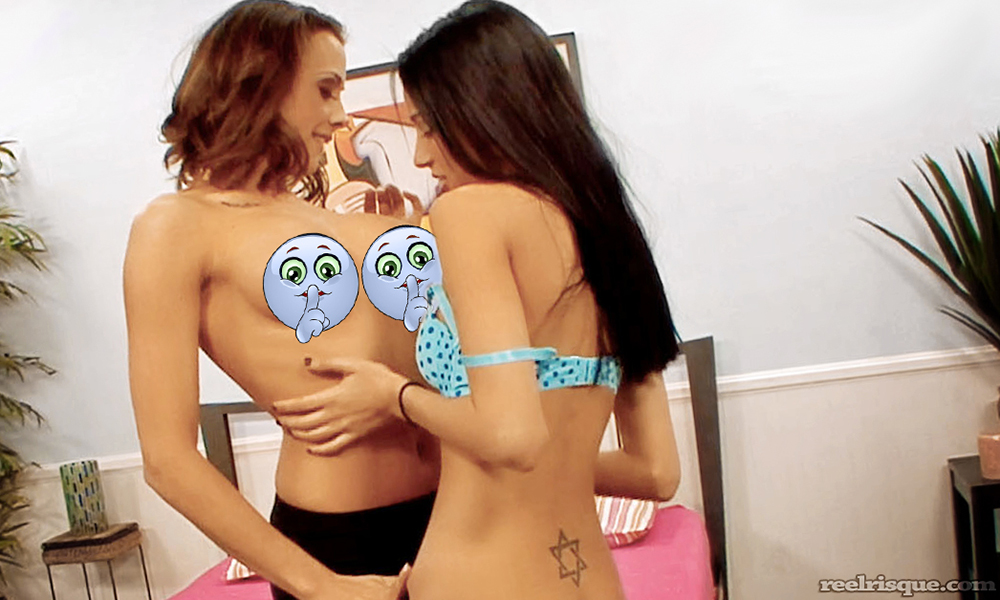 Every so often, then, particularly with stars of some accomplishment, we will see pairings like this one. As Aries Stone wanders in to do her “interview” with Chanel Preston, then, you might notice a stylish flair not exactly represented by the decor in the rest of the room. (OK. So you might notice a couple of other things when it comes to Ms. Preston’s outfit as well, but we do try to avoid the obvious around here.) Make no mistake: That flimsy little wrap-around top teamed with the leggings and strappy shoes Chanel has on could well have cost more than the couch they’re sitting on when they meet — leaving aside the fact that someone would have to pay most of us to take that couch in the first place, of course. Chanel’s outfit may not have been crazy expensive, naturally, but we cannot exactly tell because of the style. Granted, she did choose the name “Chanel” for herself, and probably not just because it sounds better than Fruit-of-the-Loom Preston. Clearly appearance ranks high on the list of things she thinks about (again, unlike whoever served as interior decorator in this case).

Perhaps more significantly, even the less famous lass here, Ariel, obviously has put some thought into the proper outfit for the occasion. Some friend might have discouraged the blue polka-dot lingerie in this instance, but that’s getting fairly picky for a situation where she only has it on and visible for less than a minute. The point here being rather more the slippery slope — pardon the expression — that women in the industry risk. You start thinking about “fashion” too much making the kind of money that these ladies do, and you can make some pretty crazy financial decisions.

Early in her career at Wicked Pictures, I happened to be in New York City with Chasey Lain on a surprisingly chilly spring day. Chasey went into one of those stores where they have like six things on display, counting on the “negative space” of the environment to connote value to the inventory. She bought an admittedly stunning leather jacket; we walked three blocks back to the hotel, and I never saw the jacket again until a few years later when helping her move I spied it in the Goodwill bin. For those numbers-oriented people out there, the simple math means Chasey paid nearly $300 per block to keep from being a little cold. Hey, New York has long blocks. Maybe it was a great deal, and I just still don’t realize it. I can say with confidence, however, that Goodwill was likely less thrilled when they got the old jean jacket I had on that day in their donations pile.

You can make a lot of money in a very short period of time if you look great naked and you do not happen to be particularly shy about sex. Just having it, though, does not require you to spend it all the time. If we can impart any lasting advice to aspiring starlets out there, we could do worse than offering that little bit of it. We feel confident Chanel Preston would agree too — smart lady, that one.

For the record, our analysis would not be complete lest we mention that this viewing marked the first time any of us had ever seen a Star of David Tramp Stamp. No matter what you may believe, Chasey Lain included, you’ve never quite seen it all in this business.