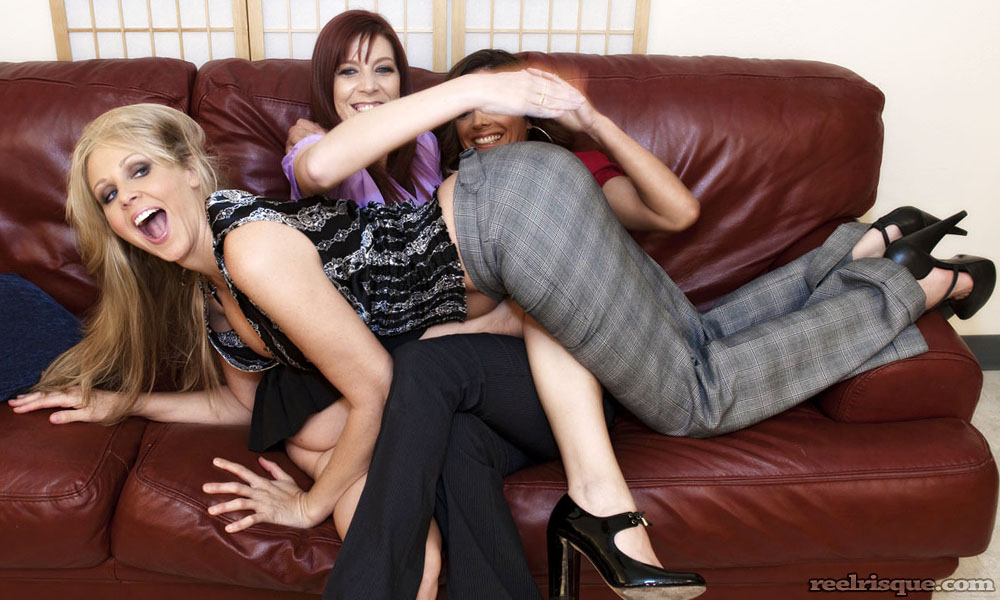 Originally in our records the “title” for this little episode was A Couch. A Screen. A Three-way. We’re not sure we ended up with a better one, seeing as how only a very small percentage of our membership might even be able to point to a “davenport” were that the assigned task. On the upside, at least now everyone knows it’s a noun. That certainly constitutes the primary reason for visiting an adult site, right? Expanding your vocabulary and refreshing your grammar knowledge? (For the record, DIVAS would be the noun in this title, though, with Davenport becoming an adjective, but we’ll stop now.)

Well, after returning from an adult industry convention during which we realized that some of us have been doing this for almost a decade longer than some of the “stars” have even been alive now, we will share with you the absolute certainty that thinking of a new way to approach a remarkably similar event can be challenging.

Most of you probably know that acronym stands for Same Stuff, Different Day — although you may have heard a different word in that second location, truth be told. The concept remains the same, however. … Even the elders do look forward to the conventions every year in one way, though: They give us a chance to visit with friends we may not have seen in some time. Sadly, long one of our favorite people in the world, we somehow missed Francesca Le this year. Either she sent others to the show floor while she conducted business in one of the private suites the companies use to avoid the noisy, chaotic, and occasionally malodorous environment in the big rooms, or we simply missed her signing times. But it was sad.

We DID get to see Julia Ann, however, and it happened early enough in the festivities that we were actually able to spend some relatively quiet time speaking with one of the most beautiful people — both inside and out — that exists on the planet. Now Julia has been in the industry almost as long as our eldest statesman here (although he tends to prefer boring titles like “owner” or “leader” or some such) yet in all honesty, Julia never ever seems to age. She certainly appears much less worse for the wear than the aforementioned elder statesman, and he’d be the first to admit that. We had but that one short time with Julia this year, though, but we left with the usual promises to keep in closer contact. Sure, that will almost certainly not happen, but we have a renewed resolve, and we have next year to anticipate anew. Without hope, what do we have in life really?

If nothing else, Julia Ann DID add that new twist we always seek on these trips: SSDD … Still Sexy, Devastatingly Delightful.

Thanks, Julia. Even though some of us remain convinced that you have an aging portrait up in your attic, you remain an inspiration for us all. By the way, you may notice the video folks picked Release the Crack ‘N’ for their title if you decide to watch the video scene with Julia Ann, Francesca Le, and Lexi Lamour (whom we unfortunately never met, for the record). This has a deceptively simple explanation: Editors are very strange people.

If nothing else, this episode led by Julia Ann and certainly highlighted by Francesca goes to show that if you put the right people in a room, you do not have to worry too much about the furniture. (Sorry, Mr. Ninn.) Damn the Davenports and Full Divas Ahead!