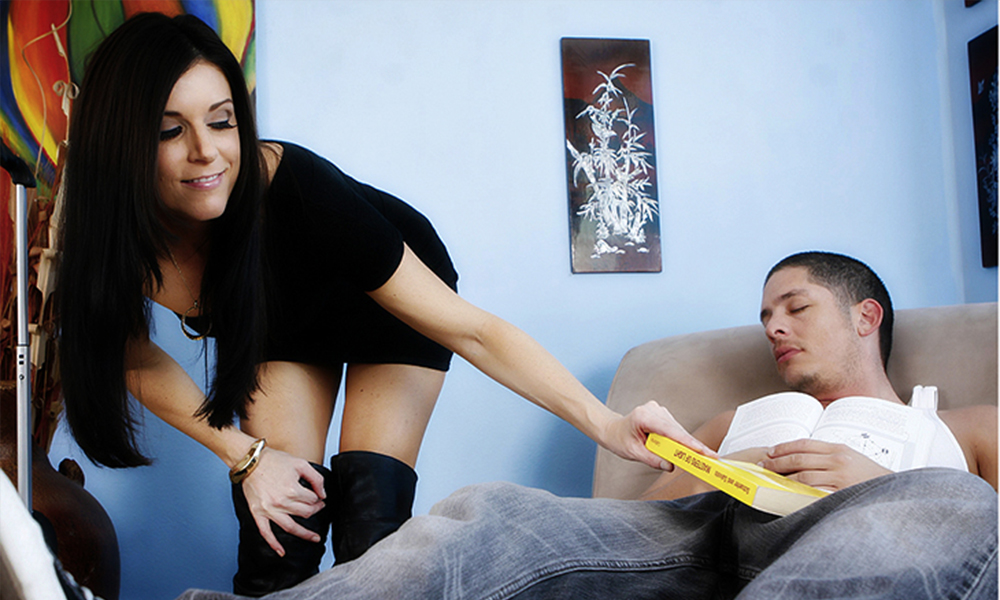 The “Muck” in Amok Fantasy

Not many of us, but a few, still remember when houses had but one telephone — usually in the kitchen with like a 1000′ insanely twisted cord on it. Fancy houses had phones in a den, or maybe in this little alcove in the entry/hallway, but we didn’t know much for fancy houses back in Thornton, Colorado. And, yes, as you have read in your history books, we had only three or four television channels, and you actually had to get up and walk over to the TV to change them. Hey, we survived. … Even through shag carpeting we survived.

Taken from that point of view, then…

Obviously India Summer makes for an excellent fantasy for basically any occasion, and she happens to be one of the top-tier actresses in the business as well. Even so, some of the “scenarios” that these gonzo directors plop on the performers really have to get to the smart ones sometimes. It goes without saying — seeing as how we brought it up and all — that India Summer also qualifies as one of the really smart ones in the industry too. But she has perhaps never had a more difficult role to portray than this My Hot Aunt sketch.

Clearly things have evolved from a sexual awareness standpoint since Rob and Laura Petrie slept in twin beds. I was visiting a very famous adult movie director’s house a few years ago when his wife convinced him to begin berating their 14-year-old son at the dinner table. Apparently mom had discovered a stash of X-Rated movie files on the lad’s computer, and the very famous adult movie director found himself in the position of preaching the ills of such material. (Yes, our lives are nothing if not stocked full of irony.) Suddenly, another voice entered the fracas from the group.

At which point, as I recall, all of us old folks suddenly decided that this might be the best chicken we had ever eaten, and we began earnestly concentrating on the meal. Still, I can never remember ever thinking about any uncle’s wife in a sexual way. Mom’s sister-in-law (presumably, of course) never put the moves on me, nor did I ever even think about it. Friends’ older sisters? Absolutely. … Friends of friends’ older sisters? You betcha! Often, in fact. … But when did fantasies start needing to be borderline icky (or illegal) in order to capture our attention?

I just keep coming back to a bit from a very famous comedy routine. I’m likely paraphrasing a bit here, but the gist of it concludes that…

If you think a family reunion would be a great place to find a date, you might be a redneck.

By the way, coming from a long — and curiously proud — lineage of Rednecks, I should probably warn you that albeit a fun-loving and remarkably self-assured crowd, you will not find very many Rednecks that look like India Summer, just so you know.

Continue Reading
You may also like...
Related Topics:India Summer